Jose Herrera was born in San Antonio, Texas and later lived with his family in Artesia, NM until he enlisted in the US Marine Corps at 18 years old. In November 2006, he shipped out to MCRD San Diego. Following boot camp Jose trained as a 0311 infantryman. After graduating the School of Infantry in April 2007, he was assigned to 2nd Battalion 8th Marines Fox Company, where he stayed the remainder of his service.

Jose completed three combat tours: one to Ramadi, Iraq and two to Helmand Province, Afghanistan. He moved to Wilmington, NC after being honorably separated from The US Marine Corps. 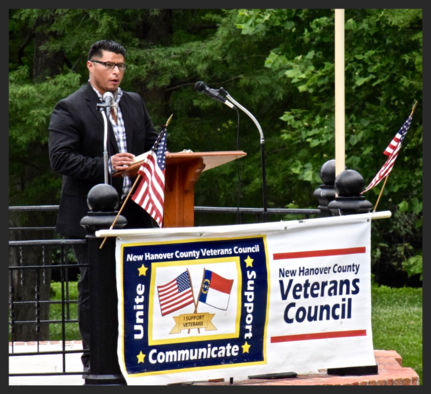 In Wilmington Jose began his mentorship with Thumos Project founder, Mark Mosher, and enrolled at the University of North Carolina Wilmington where he is completing a BA degree in Religious Studies. Here, he also serves as a veterans peer support liaison for student veterans at UNCW.

Jose has forged deep ties to his community, investing time, sweat equity, talent, and treasure, first as CEO/Community Liaison for Trinity Veteran Farms and now CEO for Thumos Project. Both organizations focus on sustainable agriculture and the implementation of clean energy. He is a passionate advocate for veterans, frequently speaking on their behalf in public forums throughout the region.